Shri Chatrabhuj Narsee (1924 – 1998), the eldest son of Shri Narsee Monjee began his entrepreneurial career at a young age of 20. At the age of 55, he chose to retire from the Chairmanship of Golden Tobacco and Golden Chemicals to devote his time and energy to the cause of education. His selfless devotion to the establishment and consolidation of Shri Vile Parle Kelavani Mandal made him the uncontested President of SVKM and Nanavati Hospital for 25 years!

With an inborn desire for philanthropy, he established and consolidated several leading Institutions in the Northwestern suburbs of Mumbai that benefitted the community, and which are flourishing even today: 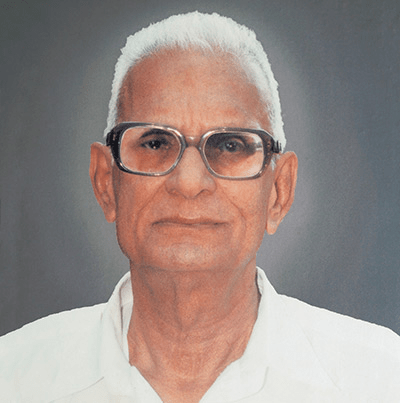 Shri Chatrabhuj Narsee – Founder Trustee of Jamnabai Narsee School, Vile Parle – believed that all learning must be a joyful experience. His views are enshrined in the creation of this educational institution:

Education is a blend of ‘ahara’ (right food), ‘vihara’ (right attitude), ‘achara’ (right behaviour), and ‘vichara (right thought). The balance of these elements are foundational to education.
A teacher must be an eternal learner, therefore in-service training is of primary importance.
In all aspects of school management and administration, extravagance must be curtailed and values of thrift encouraged.

A teacher, like a flame, has to enlighten his/her student and the student must strive to excel in all endeavours. The child must learn to excel for his/her own sake. Self-study must be an integral feature of the child’s education.